Over the last week or so I’ve been spending a couple hours a night working on a new website. Nothing is live yet but the domain is centralillinoismovies.info. It will be an information hub where central Illinois moviegoers can go to find out what’s playing in the area, local movie news, and reviews of the viewing experience at theaters in the area.

The development version of the site is progressing along great so far. It’s utilizing the new MVC 5 framework and the backend is coming together quite nicely. I intend to style it using bootstrap and hosting it on Azure. Azure has proven to be a quality host for jpniederer.com, so no reason to try another.

Once the site is live, it should be a lot of fun to maintain. Recommending movies, reviewing local theaters, and offering a site that focuses only on what’s playing locally are all things I find useful and I really enjoy movies. I’ll be sure to post here when the site goes live, but look for it being operational by the end of the month.

This past fall, I spent (or wasted depending on your outlook), at least four hours every Sunday watching football. In the heat of the moment, the time only felt like a waste if the team I was rooting for didn't win. Since my team (Chicago Bears) didn't win enough games this year, the season felt like a complete waste of time. Sure, there were some moments I enjoyed, but I could have just seen them on replays after the games were over. This coaxed me into reexamining how this time is being spent. The following summarizes what I found and why committing to watch this many games in 2014 isn't likely to happen.

The regular season lasts 17 weeks, so if we take 17 * 4 hours it looks like football took 68 hours from me. This estimate of 68 hours is likely to be extremely conserservative when I start to account for pre-game shows, postgame shows, highlights, reading articles throughout the week, extra games with teams I don't even care about, the preseason, etc. If I added all of that in, the total is probably somewhere north of 100 hours... That's just too many. Studies from the Wall Street Journal have shown that there are only 11 minutes of action in a single game of football. The majority of each telecast is actually commercials. To commit three or four hours for a single game with 11 minutes of action and 75 minutes of advertisements is truly a terrible return on investment.

In the weeks since the Bears' season ended, I've been making the most of that time. I've played guitar for at least two hours each Sunday. I spent one Sunday finishing up George Orwell's classic book 1984. Tomorrow I'm going to spend some quality time at the keyboard hacking on a new idea I have for a web app. It's going to be a good day.

With football almost over until next fall (only the super bowl is left at this point), lots of time has been freed up for doing other things. Take advantage of it. I know I will.

Since it’s almost two weeks into 2014, I took a little time to think about the things I want to accomplish from a learning standpoint. Last year, I learned quite a bit: Asp.Net MVC, Design Patterns, Cloud Tools, Startup Engineering, and much more. As much as I’ve learned, I can’t help but think I could’ve done more. With that in mind, I created the following list of concepts and learning materials I want to explore and focus my effort on in 2014.

There are so many great new tools to master and books to read about for software development that it was hard to pare down my list to something manageable. The aim of this training is improve in terms of writing clean, efficient, and correct code, something all developers strive for. With that in mind, I’ll be working on mastering Test Driven Development, getting deeper into functional programming languages (via The Structure and Interpretation of Computer Programs, brushing up on algorithms, and playing with any new web/mobile technology that looks interesting. This training will be the least structured but will definitely be the deepest.

Design is something that I’ve always wanted to learn more about but never quite commit enough time to get great at it. There are a couple of major works that I want to get through. The first is a new Udacity course called “The Design of Everyday Things” which launched in January 2014. The course is based on Don Norman’s classic book, The Design of Everyday Things. I’ve watched a lot of the videos from it already (it’s good stuff), just need to work through the exercises. My second goal is to finally set aside a couple of hours to read Don’t Make Me Think. Using the knowledge mined from these tasks, I’ll simplify and improve everything I create.

I didn’t post nearly as many posts here on jpniederer.com as I planned to this year. This site was originally created with the intention of writing one post a week. Maybe this goal was a little too ambitious, but I’m sure that it was doable. 2014 will be much more voluminous. As a way of building on what was done last year and my original goal, I’m aiming to post an article every other week in 2014 making for a net target of 26 posts next year.

What good is working through online courses, books, and examples if you aren’t releasing anything? Not a whole lot! That’s why I will publish at least two creations in 2014. Maybe I’ll make two sites, maybe I’ll make an API and a new mobile app, or I’ll do something else entirely. The products could be anything really. All that matters is that I release some original creations and put my new knowledge into practice.

Guitar is the one instrument that I’ve always wanted to learn. I’ve attempted, unsuccessfully, to learn half a dozen times or so but this year will be different! I’ve purchased Rocksmith 2014 for both PS3 and PC and also a new electric guitar, an Epiphone Les Paul, and I’m finally ready to really pick it up. I’ve been playing a couple of hours every day. The blisters on the tips of my fingers are proof that I’m making progress. 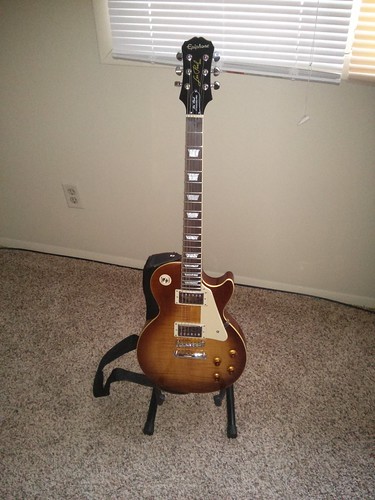 So that’s the plan for now. I’m sure I’ll complete a lot of these tasks, I’ll probably miss on a few too, but I’ll continuously be moving forward. The quickest way to become obsolete is to stop learning, and that’s not going to happen to me.

Last week I saw a deal that I just couldn’t pass up. Lenovo was selling their IdeaPad Yoga 11 for $300. Sure there were a few detractors against the product on paper, Windows 8.1 RT and low ram being its largest detractors, but the device was marked down over 50%. After using the machine for a few days, I’m glad I made the purchase. The Yoga 11 offers a highly portable and capable convertible that is enjoyable to use.

The start screen is a great way to navigate the Windows 8.1 platform. With either the touchscreen or the traditional keyboard/mouse setup. It took me a while to get used to the new style back when Windows 8 was released last year, but it’s really grown on me. As long as I put in the time to customize the start screen to suit my needs, it is a major boon to my workflow. 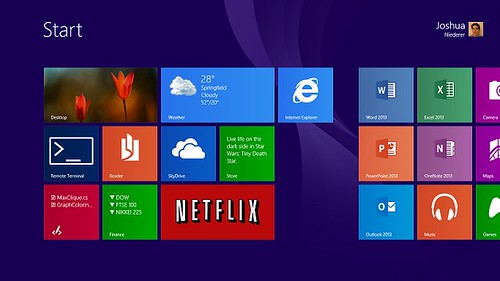 Let’s get this out of the way, Yoga 11 will never be an all-in-one workstation since it can’t run native Windows applications. That’s not say it can’t be used as a development machine. By integrating the Azure cloud, the Yoga 11’s abilities become as varied as Microsoft’s cloud service. With the credits provided by Microsoft to people with MSDN accounts ($100 a month at the time of this post), there’s very little I can’t do with my new toy. For learning and testing purposes, I’ve created a very small Ubuntu 13.10 instance that I can access with one of the multiple SSH tools within the Windows App Store. I can run this instance continuously for only $15 a month. For times when I need to develop using Visual Studio, Azure offers Virtual Machines that come with VS: 2013 preinstalled. These instances require more a bigger VM than very small, but can be built and destroyed after I’ve completed the work that needs to be done. The online TFS Service source control is a godsend in simplifying the task of working across different VMs.

Even with several Windows RT apps, Outlook, and Internet Explorer, including resource intensive rdio, all running, the system manages to continue along without slowing down. There has been a few times when I’ve ran out of memory, but that will happen occasionally when there’s only 2GB to use. This has only happened when I’ve opened 10 plus tabs in Internet Explorer. I just have to remember I’m not using Chrome on a desktop and everything should be fine. 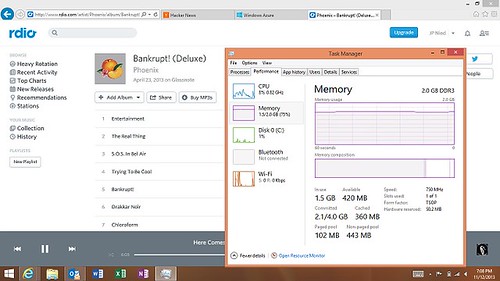 Since the Yoga 11 has an ARM processor, it runs Windows RT. This is good and bad. Good because it allows the device to have up to 12 hours of battery life, which is consistent with what I’ve seen. Bad because it’s underpowered compared with a typical laptop and can’t run native apps. For my needs, the downsides have been a non-issue. The all-day battery life can make almost any power deficiency easier to overlook.

As for multitasking, the Lenovo convertible is unrivaled. Compared to an iPad or Android tablet or Chromebook, the Yoga 11 stands out by allowing users to easily run apps side-by-side. Below I’m running Emacs on an SSH terminal while having a PDF open in Reader. 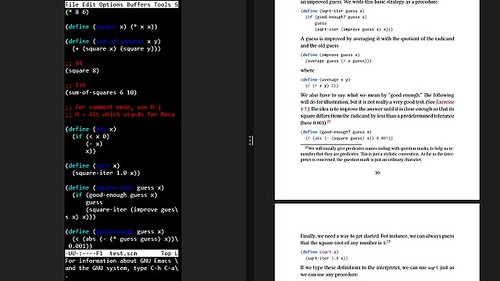 Some tasks lend themselves well to the touchscreen, others are more apt to be completed with the keyboard. Reading, watching videos, and playing games are all pair perfectly with the touchscreen. The desktop features (Windows Office and IE11), remote desktop, and SSH terminals are all better suited for keyboard use. It’s nice to have the flexibility of being able to use a laptop when work needs to be done, then flip it over to watch a movie or two on Netflix.

For the last six months I’ve dreamed of buying a MacBook Pro Retina when the new ones launched. Since Apple released the new models in mid-October I’ve been on the final checkout page at least three times. When I saw the Yoga 11 for $300 I couldn’t pass it up. I haven’t looked back yet, and I’m glad I didn’t burn the $2000+ on the beautiful Apple machine. As for the rMBP, it can wait ‘til another year, maybe it’ll get a touchscreen by then. My Yoga should keep me sated for a while. Why bring in the tank when a BB gun can do the job just as well, albeit with a little more cloud-savvy? Who knows, I might not be able to move away from the versatility of the Yoga.